Hit enter to search or ESC to close

Visit Zarda at the Taste of KC BBQ at the American Royal!

It’s that time of the year again – the American Royal World Series of BBQ is back in Kansas City for their 38th annual celebration! Zarda BBQ will be featured at the American Royal in the “Taste of KC Barbeque” celebration area at the Royal where Zarda – along with 8 other local Kansas City BBQ restaurants, and caterers – will give festival goers the opportunity to sample Zarda barbeque – and from ALL EIGHT of the others, all for one low price: $20!

Zarda will be serving samples of our juicy hickory smoked Pulled Pork Sliders and our soon to be legendary Limited Reserve Burnt End Beans! If you’ve not tried these babies yet, you’re in for a tasty treat! Picture this: tender chunks of pit-charred, expertly prepared beef brisket, lightly dusted with Zarda’s distinctive sweet & spicy dry rub – all served up in Zarda’s BBQ Beans! One word says it all: Delicious!

A Passport ticket to the Taste of KC Barbeque is $20 in advance online or $25 at the gate and includes a 2-3 oz. portion taste per from ALL EIGHT BBQ purveyors within the Taste of KC BBQ festival area. One Passport should serve two adults – but if you love your BBQ, you might pick up one for yourself and another for a hungry friend!

The Taste of KC BBQ happens at the American Royal BBQ Competition Labor Day Weekend 2017 at the Kansas Speedway. Hours are Friday, September 1st from 4pm-10pm, as well as Saturday, September 2nd from 11am-3pm and again from 5pm-9pm! 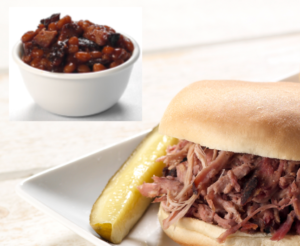